I've hit a bit of a snag on my RTK studies. I guess I didn't fully grasp the core concept of how to make stories. At first I was making simple play-on-words, or just a few hint words, which was fine for the first few hundred, but then the kanji started to get more complicated, and it just wasn't cutting it any more (I was still visualizing something in my head, but nothing super vivid). As a result I started writing more imagery, which gradually got more and more vivid as I got better at it. This was helpful to remember how to write the kanji, however remembering the scene [1] based on the keyword became a struggle. Especially at 1000 kanji where a lot of the keywords are basically just synonyms of each other.

I asked a question on Matt Vs Japan's Discord (- a patreon perk -) asking what other people do when they struggle to remember their stories based on the keyword. I had my cards setup to show just the keyword on the front, but I also had my story under a hint. My theory was if I couldn't remember the story based on the keyword, I could reveal the hint and still practice trying to visualize the kanji before looking at it. My question was if I should mark the card as hard when I have to reveal the hint (or good if it was like "duh, I knew that", or fail if I was way off). Matt is a guy of few words (or at least he is on the discord) and basically said that hints are worthless and if I can't remember the story than I failed. I only had one or two other commenters and their advice was simply to make sure my stories are as vivid as possible (which was nice, but not really an answer to my dilemma).

So... not much to go on there but Matt is the guru, and as humbling as it was I took what he said to heart.

I did a quick RTFM and reread the book (not all of it - just the intro and section headings). It turns out that I missed something pretty fundamental about constructing stories. I can't help but put part of the blame on the format of the book though. It's broken down into several sections, and each section starts with a few paragraphs explaining the next set of kanji, BUT the headings also contain little bits of piecemeal information on how you should be constructing stories, with gotchas and pitfalls to be sensitive to. I get where Heisig was coming from when he did it this way - he tries to hold your hand through the process while gradually introducing the method. However for me it would have been more helpful to lay it all out in the beginning and let me go to town from day one. To be fair the process is explained fairly well in the introduction, but the gotchas and pitfalls are mostly in the paragraphs above each section.

The concept I missed

So a "story" should be vivid and imaginative, but there's one missing component:

"...most students of the Japanese writing system do something similar from time to time, devising their own mnemonic aids but never developing an organized approach to their use. At the same time, most of them would be embarrassed at the academic silliness of their own secret devices, feeling somehow that there is no way to refine the ridiculous ways their mind works" [2]

The above excerpt is the part of the book that stood out to me and made everything click. It's even in the introduction - go figure.

A good story has to be strongly related to the keyword. For me play-on-words and mnemonics are the best approach for that. I abandoned that when I started making more vivid stories scenes (because that's what I thought I as supposed to be doing). My scenes would still be related to the keyword, but mostly in a visual sense, and usually not very well.

So the components are: vivid, imaginative, relate-able, and strongly connected to the keyword with play-on-words and/or a mnemonic device. I had all the components figured out at different times during the processes, but I hadn't applied them consistently, or necessarily together.

Here's an example of a good scene for me, but a poor link to the keyword:

Keyword: floating
My story: An evil baby with long claws frothing around in the water. Floating in the water.
Kanji: 浮

It has a great visual for me that makes writing the kanji easy. However I've hit this keyword a few times and thought to myself "crap, what was it that floats?" I need a mnemonic or play-on-words to connect this scene of a floating evil baby to the keyword floating.

To wrap up, I'm now at ~1000 kanji "learned" but a large stack of them have poor stories that need to be cleaned up. For a large portion of my cards I need to add a play-on-words or mnemonic device to connect the scene to the keyword, or add a scene to the mnemonic/play-on-words, and in some cases I just need to start from scratch. For the past 2 days I've barely been getting through my reps (yesterday I didn't even get that far) because I've been failing most of my reviews and writing better stories, let alone adding new cards. My plan is to be really strict with myself for the next little while (how ever long it takes), to make sure that I have strong stories for all of my cards. Over the weekend I may even just go through each card one-by-one and update the stories before doing any more reviews. I also need time for these fixed, or new, stories to mature in my brain. There's no point in adding new cards until I've stabilized what I have.

[1] A scene to me is different than a story. Being able to paint a vivid picture is one thing, but relating it to the keyword is another.

Literacy is one of the basic tenants of AJATT - you can't truly immerse if you can't read the language. You will miss a lot of the meaning behind words without an understanding of the kanji that compose them, and you won't be able to read a monolingual dictionary without either. There's many more benefits to learning the kanji that all make complete sense to me (in fact it just seems dumb not to) - so many that I'm not even going to bother listing them here.

However learning the kanji as a first step was a little frustrating to accept at first because I just wanted to start learning Japanese! But it has actually become a really fun process, especially when I look back at how many I've already "learned" *finger quotes*. It's going to take time for them to actually mature in my brain, but I've gone through 1000 kanji already - that's a fun thought!

The consensus is that Remembering the Kanji 1 (and 3) by James W. Heisig is the best approach to learning the kanji. So I've been doing that and using Anki as my SRS 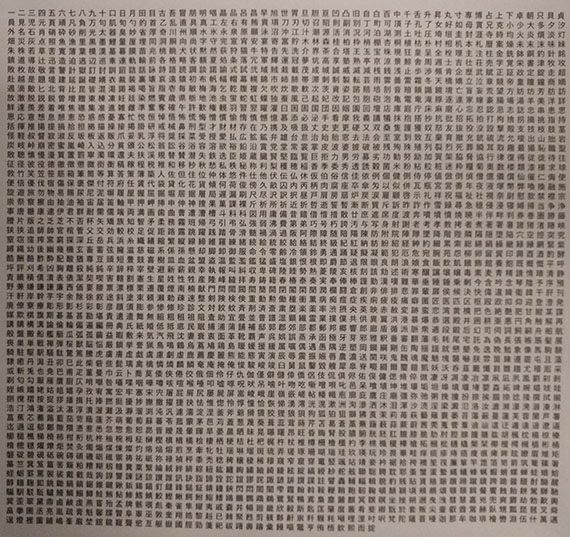 As I add kanji to my deck, I highlight them on the poster to show my progress. I've gotten through the first 1000 so far! 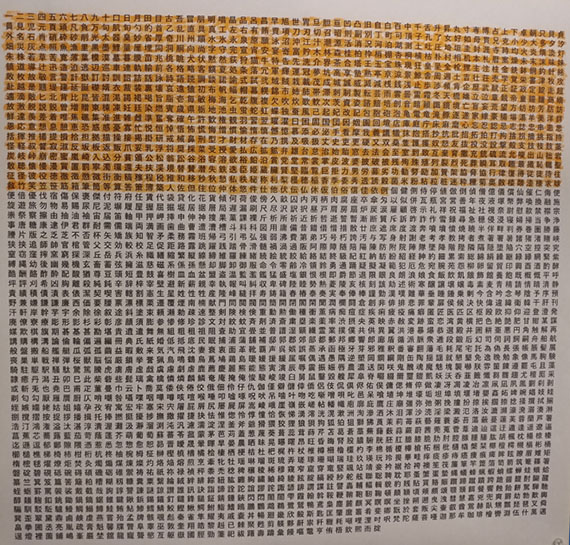 [1] The poster that khatzumoto links to in his blog doesn't seem to be available any more. I had to print my own.
Posted by Unknown at 4:12 PM 1 comment:

In my life there's been a few deep seated ideas that have always just been there. I'm not exactly sure when I got them or where they came from, but they're a part of me - they're a part of who I am. For example I always knew I wanted to live in Seattle WA. Maybe that's just because I grew up in Phoenix and I got sick of the sun and heat? But I think it's more than that - Seattle has always felt like home to me. I can't explain it. Another example is I always knew I wanted to get married and have three kids (but God laughed and gave us twins for our third pregnancy). Where I'm going with this is that I have also had this deep desire to learn Japanese. I can't fully explain why, but I've always been fascinated with Japan. Recently something finally flipped in me and I'm fully dedicated to learning Japanese.

This is going to be a long'ish series of posts, but it lays the foundation of why I'm doing what I'm doing. If that doesn't interest you then the TL;DR is: I was doing what most everyone on the tubes said I should, but wasn't making progress. Then I found AJATT and now I'm doing that.

I didn't want to spend a ton of money on this, and the internet (especially youtube) is my go-to for learning new things, it's also it's free'ish. If you spend more than 30 seconds perusing youtube on the subject of learning Japanese, you will quickly find out about the Japanese-Language Proficiency Test or JLPT, which at the time of writing this has 5 levels, N5 being the most basic and N1 being the most challenging. It's the gold standard of fluency. When you reach N1 then you've done it, you're a superstar, you're fluent, you're basically a Japanese native... (which apparently is a steaming pile of

So I naturally started down the path toward JLPT. I found a flashcard app on my phone with the JLPT vocabulary and jumped right into grinding through it. I also subscribed to japanesepod101.com to listen to on my commute to work.

At one point I had grinded through close to 1000 words, learned hiragana and katakana, and I had listened to about 50 hours of japanesepod101.com's absolute beginner series. I also read somewhere that only 20% of a language is used 80% of the time and that 20% percent is somewhere around 2000 words (this is probably wrong by the way). So doing the math, if I knew 1000 words than I should be picking up close to half of what I hear. But in reality I felt like I was picking up maybe 1 or 2 percent - what gives? It finally tipped when I was listening to a podcast which started with a sample conversation in Japanese. I listened intently but couldn't recognize anything they said. After it was done, they broke it down and explained everything about the conversation - apparently I knew all of the vocab. So why couldn't I hear it??!!!

I hit the tubes again and found this:

The first time I listened to it I didn't know what AJATT was, and I got pretty depressed about it. I felt like I was making many of the same mistakes. To summarize, this guy Jeremy spent a ton of time and effort learning Japanese the traditional way by studying for the N1 and learning in school. When he wasn't making the progress he thought he should, he just doubled down on what he was doing and worked harder. In the end he passed the N1 in the 85th percentile but still wasn't really fluent.

I slept on it, and the next morning looked into AJATT (all Japanese all the time). Everything just clicked. The whole philosophy made complete sense to me. I no longer felt dejected, but energized!

Over the next few entries I'll explain some of the aspects of AJATT and where I'm at with the process. I'll also hopefully keep somewhat regular entries on this blog to document my journey. So stay tuned!

Posted by Unknown at 9:51 AM No comments: